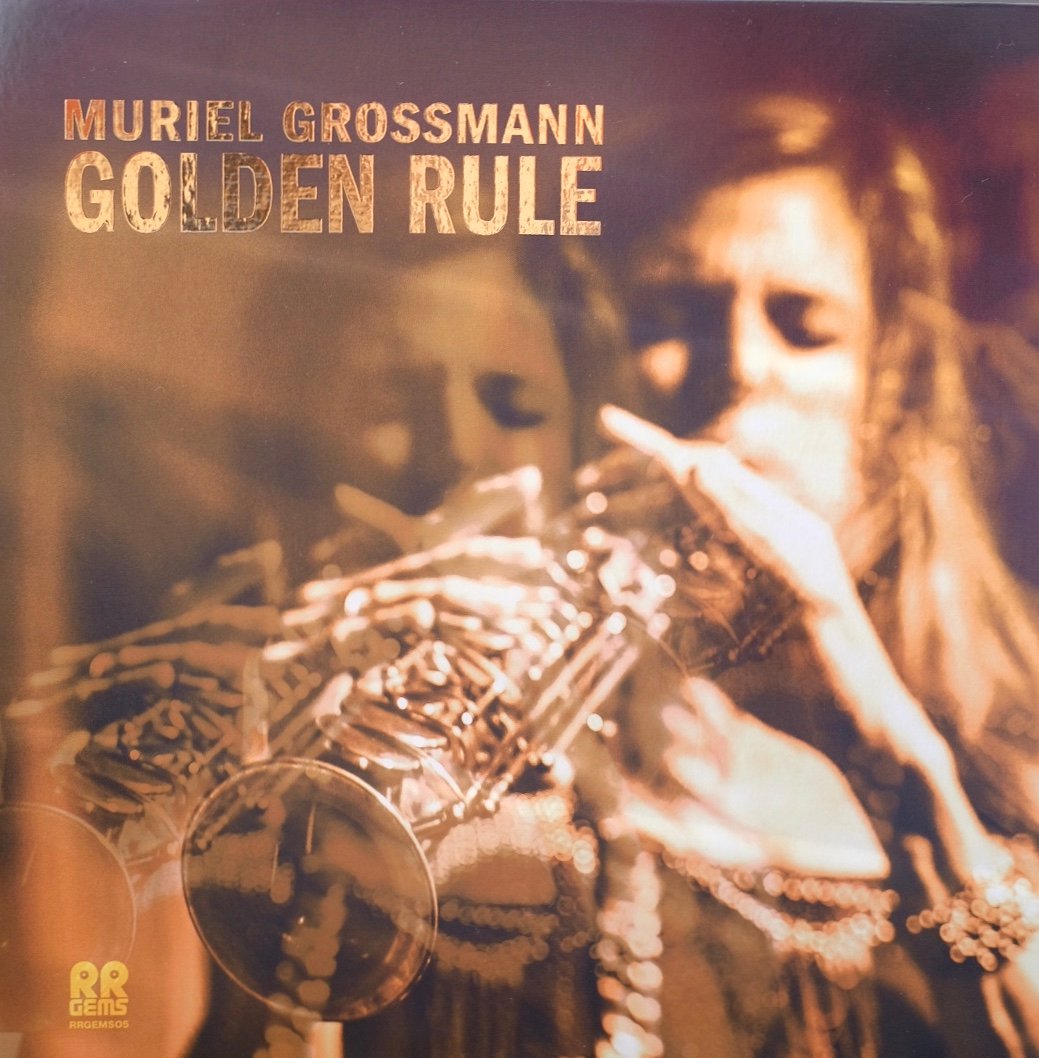 "The album title ‘Golden Rule’ signals a commitment to reciprocity and respect: ‘do unto others as you would have them do unto you’. This basic premise of social harmony and human dignity is common to both religious traditions and humanist principles, and it is this belief in our ability to create cooperatively and to live in peace that underlies the beautiful sounds of this album."
– from the liner notes by Michael Jacklin, August 2018 –

”Muriel Grossmann’s Quartet evoke the true beauty, sincerity and joy of Coltrane, whilst successfully musically singing out in their own voice, creating new ideas with a refreshing verve and skill. “Golden Rule” is quite simply an incredible album, inventive, full of character, and to my ears, a musical joy to behold.”
– Mike Gates, UKVIBE.ORG –

“Golden Rule is Grossmann’s tenth album and it’s deep. This is the third date with her current quartet… The communicative intuition of this group is not only empathic, it seems telekinetic in its anticipation, coloration, and articulation of Grossmann’s inspired compositions informed directly by meditation… Golden Rule is an 87-minute journey; it soothes, provokes, exhorts, cajoles, and beckons the listener ever deeper into its inner articulations of peace and turbulence in Grossmann’s always affirmative language that is as pregnant with spiritual meaning as it is breathtaking sophistication.”
–  Thom Jurek, ALLMUSIC GUIDE –

“Golden Rule conveys meditative tranquility and ecstatic joy  …  Grossmann showcases her ability to get the best of a tune melodically. She plays a solo so lyrical every bar feels like a discrete composition … The dynamism of its soloists and the quartet’s telekinetic performance delivers the album’s aim: providing a listening experience akin to transcendence.”
– Andrew Jones, DOWNBEAT –

“Searing work from saxophonist Muriel Grossmann – a player who clearly draws a lot of inspiration from late 60s John Coltrane – but who also turns out a record here that’s completely her own! … – This is deep stuff – not an easy nod to the spiritual scene, but a much richer record – extremely well-conceived and executed.”
– DUSTY GROOVE –

“You get the sense that this Mediterranean island off the coast of Spain, with its sun splashed vistas of ocean and mountains, itself played a role in influencing the sound and shape of Muriel Grossman’s work: there is great beauty here, and a mix of cultural influences that, like the island, lend a unique feel to the proceedings.”
– Bill Hart, THE VINYL PRESS –

“Trane, especially the late Trane, regarded music as a kind of sacred, spiritual act. Following him, Muriel Grossman aspires to the same spirituality in her music, and — damn it! — she’s great at it! … I consider her new project GOLDEN RULE to be the creative pinnacle of this talented jazz lady and her strongest work up to this date.”
– Leonid Auskern, JazzQuad –

“Primal music, which reaches the body in the deepest, which numbs the soul of intoxicating flow, living music, which nourishes us. … Listening to the latest records by Muriel Grossmann, until the publication of this indisputable masterpiece, it is not an exaggeration to say that the saxophonist is a direct heir to the JC master, certainly the most sincere and the most sensitive of this young century.”
– Marc Sarrazy, Improjazz –

“Grossmann recently told Bandcamp Weekly. “I wanted to bring out an album where I really dedicate the whole [project] for him.” But the album isn’t some rip-off of Coltrane’s best work; Grossmann tweaks the rhythm to celebrate the mid-to-late-‘60s era of free and spiritual jazz, when would-be icons like Pharoah Sanders and Albert Ayler played cafes and jazz clubs in New York’s Greenwich Village, just trying to make a way for themselves.”
– BANDCAMP WEEKLY –